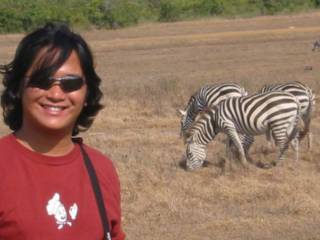 Friday, March 7
After our lunch meeting (free Jollibee food!) with Judith, we prepared ourselves for our trip to Coron. Riding on cabs, we traversed the busy streets of Manila. My group, composed of Cathy, Augs, and Boyet, arrived at Pier 15 first. According to our cab driver, all Palawan trips use this pier. Unfortunately, he was wrong so we immediately looked for another cab that would take us to Pier 4. We should have stuck to the original plan. Anyhoo, we're still the first team to arrive. After a few minutes came the group of Trix. Sym is nowhere in sight. We took some Bonamine, bought some food, relieved ourselves, etc. but still no Sym. 4 o'clock was our departure time. We thought we won't make it but alas! Sym arrived.

We were abhored to see the area where we would spend the rest of the trip. It was so full of people! Not to mention, hot and eeky. Anyhoo, we tried to upgrade our ticket so we could comfortably sleep. Using our charm (?), we were able to sleep in a more comfy area--a level above the dingy place.

Sleep was the first thing we had when we got settled. Around 9ish, we decided to have dinner. We found the boat's dinner/bar/sing-along area. Our dinner was okay. We had cake for dessert. We had some live jologs music too.

We checked out the perch and stargazed once more. Then sleeping time once more...

Saturday, March 8
5 o'clock. We heard from the ship's intercom that the boat was docking and they will leave for Puerto Princesa at 7. We thought docking would only take a few minutes but it seemed decades before we were able to leave the boat. We took our first pictures in Palawan. A guy from SeaDive approached Sym and at first, she hesitated to answer but it turned out that they were really expecting us. We rode on this small boat that took us to our lodge. We met the caretaker of SeaDive--Maribel or Maribeth (Lala couldn't clarify this). We also had our brekky--bacon and eggs. The bacon wasn't crispy at all. Frustrating!

We then checked out our rooms. I shared the room with Augs & Boyet. It was a small room but it had aircon and a shower that offers hot and cold water. Great! After taking our bath, we went island hopping.

First stop, Skeleton Beach. We brought some snorkling masks and fins. It was so much fun! We even saw a sunken prow! We also saw our good ole friend, Mr. Sea Urchin. This time they behaved.

Second stop was Kaliwantay Beach. Augs and I tried kayaking first. The rest of the group stayed and had some picture taking again. The boatmen who went with us became our cooks. We brought some crabs and fish for lunch. Yummy!

Third stop, the twin lagoons. It had this cave-like entrance that required some submerging maneuver. Although the scenery was nice, this is the part where I enjoyed the least. I lent Cathy my fins (wrong move!). Trixie had to drag me on our way back because I was too slow. Another bad thing happened--I was bitten by some nasty sea creature.

Fourth stop was Cayangan Lake. It was one of the cleanest lakes in Palawan so we were all excited to see it. We even had to pay 150 for it. We had to hike for a few minutes to get there. My left leg started to scream so I moved slowly. The lake was clean alright. Boyet also saw some shrimps. Now this is the part where Chel got her first battle wounds. We knew that she was in trouble when we heard her famous scream.

Fifth stop, Makinit Hot Springs. It was pretty damn hot. I was joking that my eggs were being cooked. Teehee...

After the island hopping, we decided to call it a day. We had dinner at this small restaurant. We feasted on tinola, menudo, and nilaga. They even had videoke so we rendered a few songs. First song was "Banal na Aso". Next was the famous "All My Life", where a teary-eyed Augs couldn't sing the line, "There was a time" (we have no idea why). Third was Boyet singing "Heaven". And lastly, it was Shakira Beng with her song, "Underneath Your Clothes".

Back at SeaDive, we drank a few beers for our nightcap. 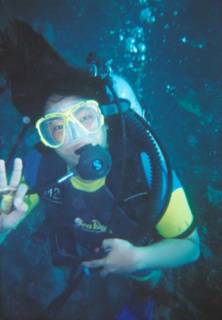 Sunday, March 9
The most exciting part of the whole Coron trip. This is our scuba diving day!

The guys woke up early to check out the market for our lunch. We bought some tilapia, spareribs, kangkong with bagoong, and watermelon. We met back in SeaDive to have our brekky (crispy bacon & eggs).

Arni (our diving instructor) gave us some lecture on diving. He told us to be confident under water and just relax. He showed us a short video too on our introductory diving. Then we tried putting on our wet suits and BCD (Bouyancy Control Device). Cathy and I got different wet suits from the others. Ours is more stylish but my BCD is kinda shabby.

En route to our first dive site, Arni taught us some hand signals. We listened to him on how to setup our BCD too. Before we even tested our scuba diving skills, Arni again gave us some tips like how to defog our masks (Augs "enjoyed" this technique that he had to repeat the process several times), how to equalize, how to recover our BCD's primary regulator, etc.

With the help of Arni's assistant instructors, we tried our very first scuba diving! Noynoy was given to me and Boyet, my buddy (& Augs'). It was really an unforgettable experience being under water. I had a hard time staying low so NoyNoy had to put some rocks in my pockets. He also had the camera too! He took us some pictures holding onto some beautiful corals but unfortunately something bad happened to the camera... =o(It took some getting used to but once you're comfy underwater, it was such a blast!

After a few minutes, it was time to have lunch. There was this old German geezer named Edward who joined our trip. He immediately took a liking to Trixie whom he fondly called his special friend, "Trrrrrrrrrrixie".

Next dive site was the Skeleton Beach. This time, Arni let us just swim by ourselves. He also handled the camera so it's a good thing to stay by his side. ;o)

It was more fun viewing the sunken ship this time because we could now get closer to it.

All good things must come to an end.... Diving is a very good learning experience. You will learn how to trust yourself (and your buddy) and stay focused.

We finished early so on the way back to SeaDive, we decided to check out the Coron and sunset view from a nearby mountain. It was a long walk though. I thought I wouldn't make it. Boyet helped Cathy reached the top too! We had our pictures taken on top of the mountain. This is also where I met my own German friend ;o) Teehee...

We had dinner at the same restaurant as last night. This time, we had menudo, pata tim, and some leftover tinola.

We slept early 'cause we had to wake up early for our Calauit trip the next day. 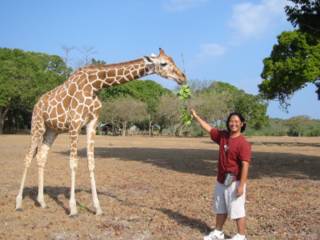 Monday, March 10
We woke up super early! At 3, I brushed my teeth, washed my face, and changed clothes. After having coffee and waiting for the rest of the barkada to get prepared for our trip, we rode on 2 FXs. I travelled with Lala, Trix, Augs, and Boyet. After an hour and-a-half ride, we reached Calauit. We transfered to a boat that gave us a 30-min view of mangroves and some birds.

First thing that we did in Calauit island was to listen to our tour guide talked about the history of Calauit wildlife. Next, it was time to feed the animals. Woohoo!

We met our very first giraffe named Jinggoy. At first, he was hesitant to eat when Cathy was showing him a tree branch. After a few minutes, he loosened up. I was the first one to feed him. Woohoo! It was fun!

Afterwards, we met a dazzle (a group of zebras). Picture Taking as expected.

Then we visited the cages of a bearcat, a python, a boar, a porcupine, mouse deer, and crocodiles. The bearcat (Joker) exhibited this strange behavior like there were a couple of times that he acted like he has gone amuck! He even clawed me! I thought I would require quarantine! Got worried for a while there...

Before lunch (tapang kalabaw and rice) came, we met the manager who told us some sad stories about their situation like lack of funds...

We settled our bills and thanked our hosts.

Then it was time to head back to Coron. We were super tired and sleepy. And my insides didn't like the tapa so much. On our way back, I tried not to think of our restroom so much. ;o)

'twas time to take a nap for me. We started buying pasalubongs too. We checked out Mismo (La's suggestion). If not for the long wait for our food (comprised of Sinigang na Hipon, Tuna Steak, and Chix Wings), we would've truly enjoyed our din-dins.

Tuesday, March 11
We woke up around 7ish and had our brekky (ham and eggs this time). Later on, it was time to check out the Barracuda Lake. To get to the lake, it would require some rock climbing skills and I'm soooo happy that Boyet guided me. Cheers, Boyet!

The lake was surrounded by very nice rock formations. Boyet and I had fun playing with the shrimps (they were not afraid of us!). We didn't have much time so after a few minutes, we left the place.

We got back to SeaDive around 12. Had lunch. My craving for adobong pusit was finally granted. We had tuna steak and pork sinigang to go with it. Sweet!

At 2:30, we left Coron. We got to the Busuanga airport before 4. We had lotsa time to kill. I even played around with the local dogs. Our flight was delayed for about an hour though.

We reached NAIA around 6. Lala was as white as a ghost. She was maybe thinking of her dream similar to that of the movie, "Final Destination", or just plain dizzy. Poor girl. Claimed our luggages and parted ways with Chel, Lala, and Cathy. Had dinner with the rest of the group at McDonald's... 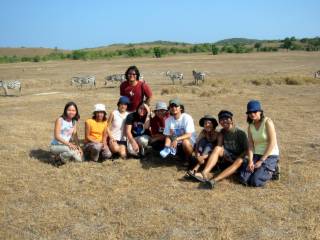 posted by knottydon at 9:10 PM