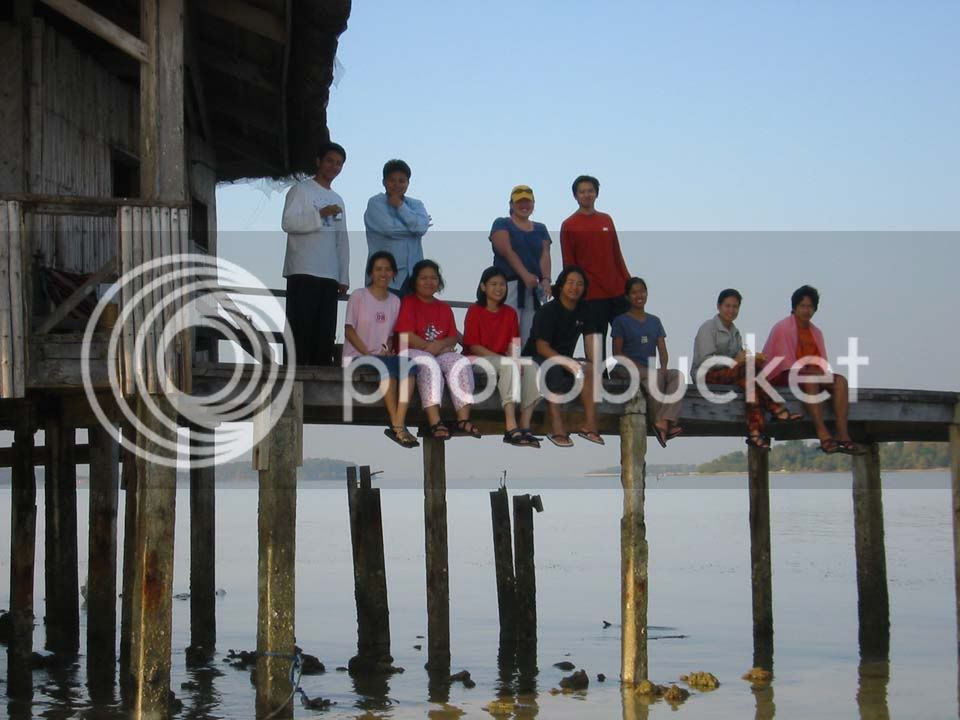 Friday & Saturday, February 28 & March 1
After having dinner at McDonald's, we left Makati for our trip to Masinloc, Zambales. As always, we left really late so, riding in three cabs, we were like contestants in the "Amazing Race" once more to beat the 12 o'clock bus departure. Our cab got there first.

When we went inside the bus, our seats were already taken. Knowing Neil's temper, he immediately went out again to talk to the bus station administration. For most of us, we were able to get our seats back. Unfortunately, Laaa, Shell, and Beng had to share seats.

After an hour of traveling, a loud bang was heard inside the bus--a rock or sumpthin struck the bus right side. We later found out that there are many similar incidents like this involving the Victory Liner.

We reached Masinloc after 5 hours or so. We finally met Neil's dad who resembles him--more white hair though. We were all sleepy and tired so we decided to get some shuteye. After a few hours, it was time to buy some food. I stayed though and had my brekky (pan de sal & liver spread). I heard that Shell sometimes eat liver spread with rice. Interesting! Afterwards, we played ball and "patintero". 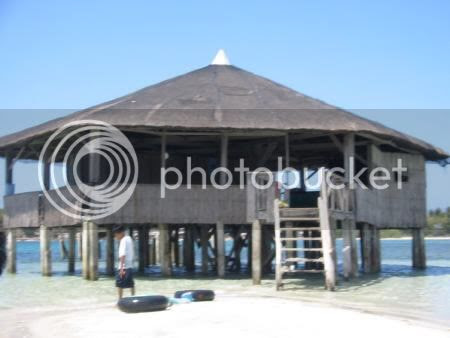 Around 1 pm, we left Neil's place and checked out the famous house on an island. It turned out that it wasn't so big an island. I was expecting more like a Survivor type of island though. Also, another group has invaded our place! Bummer.

Jojo, Raz, Neil, and Tom were our official cooks. After tasting the sumptuous tinola and the grilled tilapia, it's no wonder that they took charge of the cooking. Netski also made some ensalada. Mangoes were everywhere too! Since I didn't participate in the cooking prep nor the cooking itself, I decided to be the cleanup guy. With Beng's help (who likes to throw things into plastic bags), we cleaned up the place. 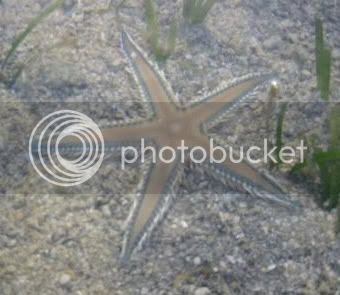 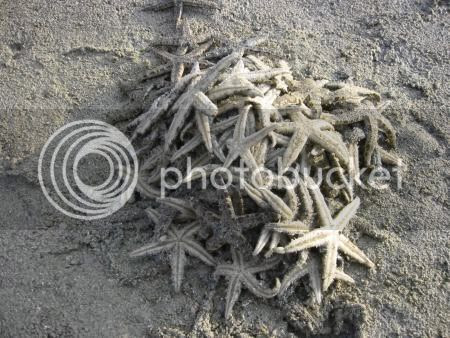 Around 4, it was time to test the waters. There were so many starfishes and weird-looking creatures (one was branded as a snake; blame Laaa's blondie mind). Never seen nor touched a starfish until this day so that was a treat for me! 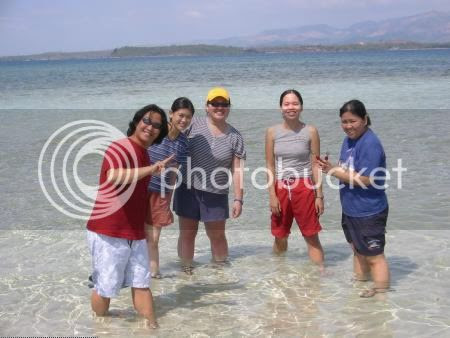 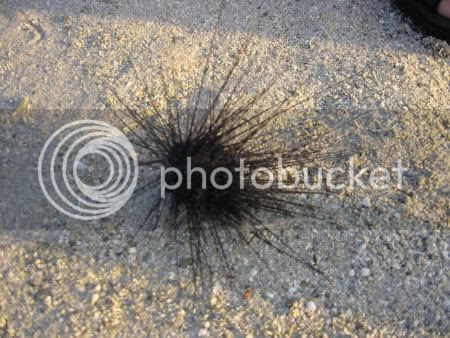 And then there's this incident regarding sea urchins. One decided to squeeze itself into the foot of Netski and another in Ogz's. With the latter, he was able to take it out. We thought that was the end of it. After an hour or so, someone noticed we had a visitor--Ms. Angelina Jolie. A strange reaction happened to Netski's lips. It doesn't look that bad though. We were more concerned as to what other reactions might occur. Good thing, that was really the end of it.

Around 6, it was time to cook dinner. This time, we had grilled pork (marinated by Joy Ong Yiu), the grilled unicorn fish, some more tinola soup, and ensalada. Heavenly indeed! The only not-so-good part is the fact that we just washed our cups with sea water. We could still taste tinola every time we drink soda.

We brought some booze. There's no better way to consume them than to have them with your good friends and do some stargazing. We actually counted some falling stars. We had 3 rounds of gin pomelo (not enuff). Jojo also showed us some magic with the alcohol. We kept telling Shell not to drink too much. It ain't fun to chase her on a dark beach.

Around 10, some decided to sleep. Laaa, Shell, Beng, and I had some bonding. Shell kept telling us that she's gonna die with her back pains. Beng took a leak near us. Laaa belted out "A Whole New World". All the while, Tom had been listening to us share some personal stuff.

We slept around 1 am. It was quite hard because we didn't have any blankets nor mattresses. It was freakin cold. 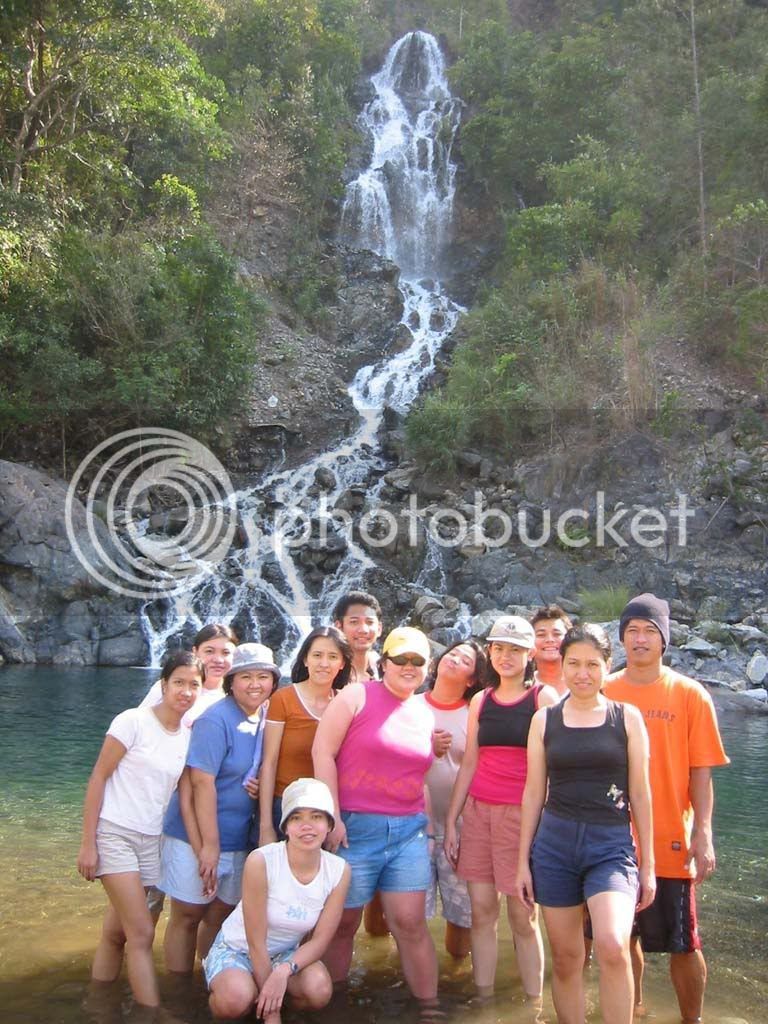 Sunday, March 2
The next day, we woke up around 6. Brushed our teeth. Checked out some starfishes around the small island. Had brekky (hotdogs, bread, and noodles with coffee). We even drank from beer cans! After an hour, we packed up all our stuff and left the island.

While waiting for our turn to wash, we played ball again. It was fun! The guys were really good. Laaa had a quick training. Neil also proposed a different kind of basketball to play. Laaa didn't accept his offer though. ;o)

Around 1, we had our lunch. Raz made this super delicious talbos ng kamote with bagooong. It complemented Netski's pork adobo and Laaa's salted egg salad. We also had ripe mangoes for dessert. 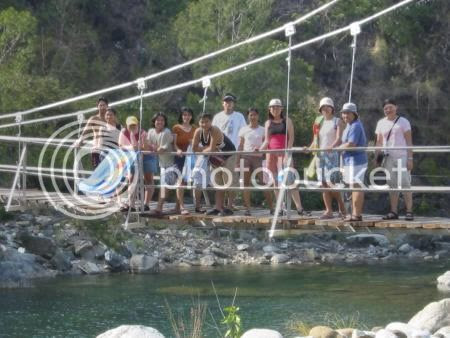 We left Neil's place and proceeded to Coto (a place with a waterfall and a man-made pool). We looked like "espasol" after the trip. It was sooo damn dusty. The place was nice. There's a suspension bridge (Shell had a very hard time crossing this), a nice waterfall, and 2 swimming pools.

Joy, Shell, and Laaa are good swimmers while Neil is a good diver. We had fun swimming. We washed off all the dirt in our bodies. We also found out (thanks to Raz) that the sound of rocks being banged together is amplified in the waters.

We left around 6 'cause we decided to take the 8 o'clock trip. Bought some mangoes for pasalubong. We also decided to rent a van which gave us an extra hour for preparation.

At Neil's, we shared an outdoor shower. Ogz had his bath with Joy. I had mine with Shell & Netski. Of course, Jojo and Raz had theirs together.

Our dinner was composed of sardines, corned beef, and meatloaf.

Our van arrived at 9 pm. It was a twelve-seater van. Joy & Ogz sat in front, while Tom and I sat at the back. The rest were comfy in their seats. Unlike us. Bummer!

We reached Sta. Ana before 2 am. It's nice to be home again. Soft bed I miss! And then there was an earthquake, but that's a different story ;o) 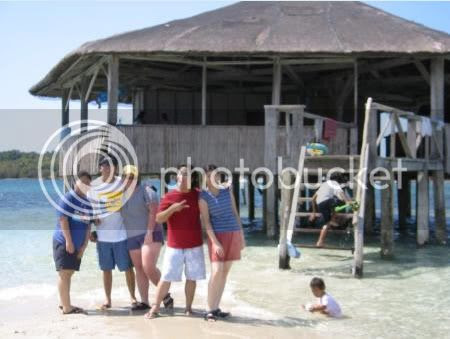 posted by knottydon at 9:02 PM