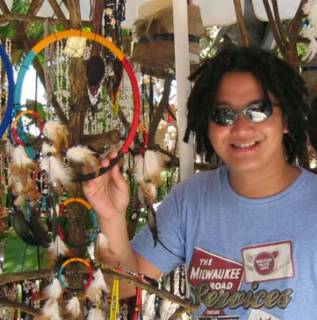 Thursday, March 25
Left Makati around 6:30 in the morning. Got to the airport very early. Had tapsilog brekky at Carmelino's.

Our flight departure got delayed. We left at 10:10. Reached Caticlan around 11. Had a strange ear incident. Couldn't hear clearly for some minutes due to air pressure. Good thing, it went back to normal. Whew!

Hailed a tricycle and went to the pier. Boarded a banca and reached Station 1 after half an hour.

Found our final destination, Frendz. The place was otay. It was agreed upon that Boyette and I will share a bed on the second floor. Funny because there's a mosquito net covering the whole bed. It's been a loooong time since I last slept under a net.

We had a late lunch at the infamous Talipapa. Had shrimps, porkchops, and sinigang. Afterwards, we checked out Boracay. Found many stores selling lamps, necklaces & bracelets, and offering tattoo services.

Also met Kuya before dinner. We swam for awhile and walked on the famous white sand. Even used the sand for our body scrub. That was funny! The sand was so damn fine!

We had dinner at Myka's. Their pinakbet was recommendable. We also had chopsuey, tinola, and some isaw.

Back home, we took a bath. Played billiards with Glenn and card games while drinking some gin pomelo. 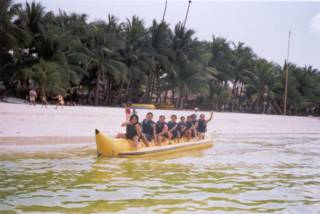 Friday, March 26
Had bread with liver spread and peanut butter for brekky.

We rented a banana boat. Very excited to try this out. I even took the front seat! For awhile, I wasn't sure if I will be thrown out of my seat. Then boom! We all went overboard! Drank lotsa salt water. Thought I would die until someone shouted that the water level is so foolishly low. It was very funny! Another funny incident was when a guy was picking me up to get back on the boat. He, and a couple of friends, went overboard the second time. And then we went for another ride. Trying not to fall the third time but I slipped. Not sure if I should let go so I held on. Wrong move! My finger got scraped. Anyhoo, it was memorable and fun!

We went to Mandala Spa to check out the place and visit Kuya. It was so peaceful there. Ogz and I even reserved a massage slot at 6:30 pm. Kuya cooked our lunch. We got our shrimps, rice, and tuna, and returned to Frendz. We had the most sumptuous lunch.

We rented a paraw to view the sunset. It took us more than an hour to see the sun setting and then came back home.

Ogz and I went to Mandala Spa for our massage. First we took a shower. Changed into an orange sarong. It was an hour and a half of pure bliss and serenity. I got massaged and pampered from top to bottom! Fell asleep even. Afterwards, we had a delicious ginger tea.

Went back to Frendz to relax some more. Played cards and ate some pistachio nuts.

Had super late dinner with Joy and Carlo. Afterwards, we had our henna tattoo. I had a scorpion on my right leg.

Saturday, March 27
It's volleyball time in the morning. It's fun to play again after so many years. We also met Tina, Aster, and Matt. We rented a bigger boat and went island hopping from the crocodile island where we snorkelled for awhile, to Fairways & Bluewater, and lastly, to Poca Beach. It was a short boat ride though.

Had lunch again at Talipapa. This time we had good lunch. Bought some pasalubong too for Mom and Angela. My back was burnt. It freakin hurts.

Went back home and slept for 3 hours. Had dinner with Dax & Ruthie. Had another tattoo (a shark this time) on my left leg. Went to Club Paraw and chugged a couple of beers.

Sunday, March 28
Today's the big day. Ogz and I prepared for our wedding script.

The wedding ceremony of Nick and Jan started late. Since I had no prior wedding hosting experience, made a blooper with "bridesmen". That broke the ice. The wedding itself was fun.

We were given a gemstone necklace and candles for souvenirs. Ate a lot too. Met Karen there and we caught up. Danced with some people. Had so much fun destroying the sandcastles.

Afterwards, we went back to Club Paraw for a few drinks. We were later joined by Matt and Aster. 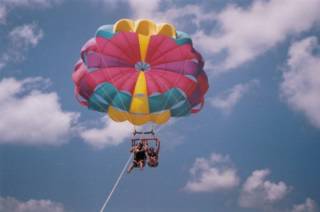 Monday, March 29
No pressure now. Did some kayaking and for the first time, parasailing. Boy, it was so much fun! Went up so high in the air. I did it with Tina. Saw the whole island of Boracay!

We transferred to Club Panoly in the afternoon. The place was so much better than our previous hotel. We tried the beach on this side of the island. No moss at all. But the sand was less fine. They also have a warm pool and jacuzzi. We even played billiards and pingpong. Had porkchops for dinner while listening to some live Reggae music.

Went to Cafe Breizh for some crepes with Joy and Carlo. Then, I had a nice warm bath!

Tuesday, March 30
Time to leave Boracay. Went to Talipapa around 9:30. Checked out early at Panoly. We bought some pasalubong. Also, had another massage there before leaving the wonderful island.

Left Boracay at 4:30. We even saw Nick's family and Matt at the airport. Reached Manila around 6 pm.

posted by knottydon at 9:57 PM