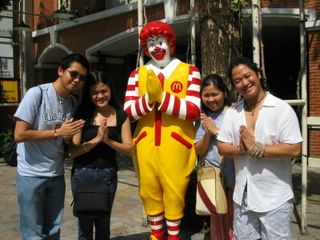 Wednesday, November 24
Left Manila around 11 pm. Joey was kind enough to drop me and Ogz off at the old airport. Later on, we were joined by another good friend, Dennis.

The flight was for 2 hours and 45 minutes so that's good. I enjoyed my fish dinner.

First thing I noticed, Thailand looks like Manila but a cleaner version. Our hotel was called First House. First thing we did was unpacked our stuff.

I planned to check some places in Bangkok where I can buy some stuff for my dreads. We even saw a guy at the airport with colored dreads. ;o)

My roaming doesn't work. That sucks! 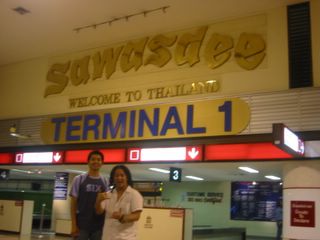 Thursday, November 25
First day in Bangkok. Woke up early for our free brekky. Not much to choose from. At least their OJ was good.

We decided to check out first where we could exchange our dollars. Found one after walking a few distance from the hotel. Exchanged my 100 bucks. 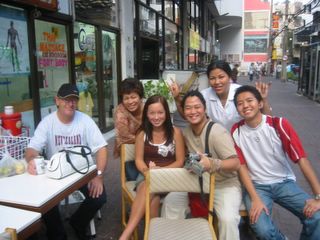 Then it's shopping time! We rented a tuktuk--a different kind of tricycle. A bigger version.

We went to a nearby mall but found nothing to my fancy. Since it was close to lunchtime, Dennis suggested we try the famous chicken rice. I liked it. It's just chicken meat cooked in its own broth. But when you put some of the house sauce, yummmmmmmmy! 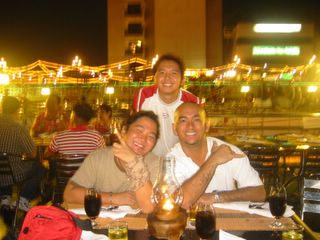 Later that night, we went on a cruise! It's a big boat and apparently, people like doing this kinda thing. It's my second time on a huge boat so I'm pretty excited to try this one. Dinner was buffet style. Ate so much shrimps and dessert. The view from the boat was nice! 'twasn't cold too so I really enjoyed the night. Ogz and I had fun commenting on the lit boats that passed us by.

Afterwards, it was time to see the famous girlie shows. When we got there, the place was packed to the brim! Cellphones and cameras were banned. It was dark but the stage was properly lit. There were 4 posts on each corner of the stage. Two girls were performing. Then a couple did it on stage. Whew! We noticed some people left afterwards. We looked for better seats.

A fresh batch of young ladies performed with different props: pingpong balls, banana, blade (!), long ropes, darts, candles, and even fire! There's this one woman who drew a face with the caption, "Welcome to Thailand". Unbelievable! It was such a treat. My favorite act was when it got darker and this girl pulled out a luminous bunting. ;o) The finale was the couple sex act, complete with "When You Say Nothing At All" background music. Will never forget this night.

We didn't end the night yet. We went to Dennis' favorite bar called Bamboo bar. He's a regular there. He even had his photo on the wall! We tried Thailand's local beer: Singha. We met Dennis' old friends. Danced and drank and flirted with some girls. There was a girl celebrating her birthday. They played around with icing. I wasn't spared. Half of my face was covered in mocha icing. Had some on my dreads too. Bummer! I had to quickly wash my face. Got drunk after a few hours.

Friday, November 26
Instead of using our free day tour, we rented a van and planned to check out Ayutthaya. We were joined by Cathy and her friends: Arlyn and Sharon (we fondly call her "Pasaway" for a reason I will share later on). The trip was almost 3 hours. I caught some shuteye on the way to our destination.

The owner of the van invited us for some free lunch! Thai food is normally spicy. I love 'em. 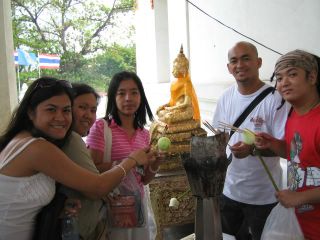 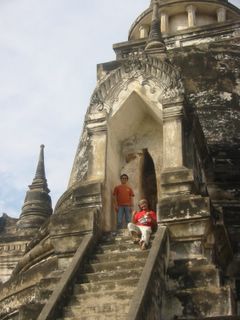 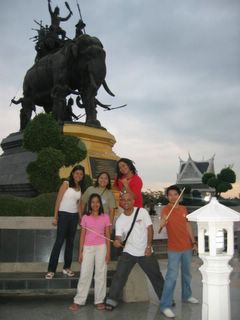 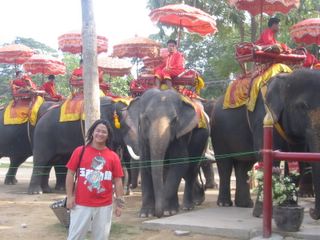 We visited some temples. Had our pictures taken with a big buddha, some old structures, and elephants. That ate up all afternoon.

We went back to the house of the owner's relatives to have authentic Thai dinner. It would've been more enjoyable if not for those damn high-breed mosquitoes who found a way to get inside our clothes!!!

Afterwards, we participated in Loi Kratong, a ceremony in which people prepare a small boat with a candle, incense, and flower decorations. They place these boats on the river to get rid of negative forces. 'twas a bit disappointing because not too many lit boats were present.

As a consolation, there's an ongoing game where we could buy a ticket for 10 Baht and we could exchange it for a number. Each number has an equivalent prize. I got some soap. Arlyn had a higher number so we got excited when she got her prize wrapped in a nice paper. When she opened it, it was a box for a kettle. We screamed because we thought she's very lucky. We screamed more when we found out that the prize was consisted of 2 condensed milk cans and a heart cutout. Don't judge the book by its cuh-ver. 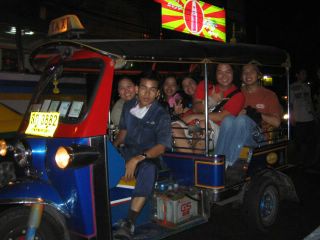 We visited Khao Sarn. 'twas HEAVEN for me. There were a lot of people drinking and having fun. Saw some people in dreads. Some were having their dreads extension. I bought some beads too. 10 beautiful colors. Saw some nice malong for 150 Baht. 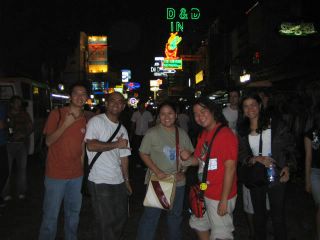 We went to Burger Machine to have our midnight snack.

Saturday, November 27
After brekky, we went to the famous floating market. There were a few boats selling wares. I bought a souvenir shirt. We had lunch on our boat too. I had some bagnet-looking meal. After lunch, we fed some fish. After an hour of boat riding, we collected our souvenirs--a commemorative plate with our photos. I shared the photo with Ogz. He didn't like to buy it so I got it. 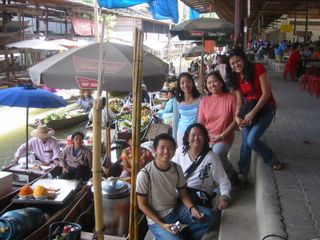 We proceeded to Wat Po where we visited the famous reclining Buddha. We took some pictures of different temples too. We also saw some deaf group. I was happy to find a cute kitten. Took some photos with it. 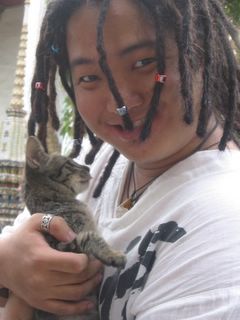 We tried the famous Thai massage. An experience of serenity, relaxation, and with little pain.

While walking, we saw a stall selling some food. We tried this very thinly sliced squid. It tasted sooo good with some spicy peanut sauce. A must try!

Next stop was the King's palace called the Grand Palace. 'twas already late so we just had our pictures taken near the entrance. Then everything stood still when the son of the King passed by the main road.

We rode on a cab and went to Pat Pong. Shopping again. I bought my first Converse! Shopping continued with Thailand shirts for Mom and Dad. When I was checking out a nice pair of earrings, I noticed that my friends were not with me anymore. Got lost for awhile. After seeing them, I got myself a pair of Von Dutch pants for 1K Baht and a nice shirt. 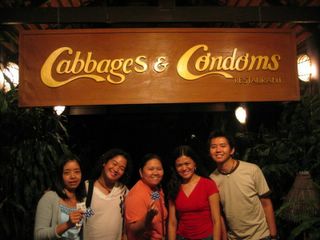 We had dinner at Cabbages and Condoms. According to the story on the menu, 'twas because family planning is important and should be accessible like veggies. We tried some appetizers, chicken and pork satay and spring rolls. Delicioso! I tried the authentic bagoong rice. Yummy! Sooo full after dinner. Instead of the usual mints that they give away for patrons, we took home some condoms! 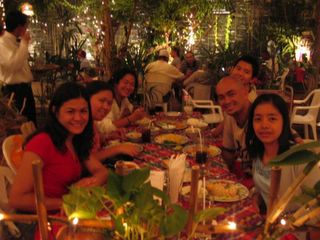 Went back home. After my bath, we played cards and drank some beer.

Sunday, November 28
When we found out that we overstayed, we left First House and proceeded to Khao Sarn. Found a new temporary space at Wally House. It's not that good but it will pass. All six of us shared 3 beds. 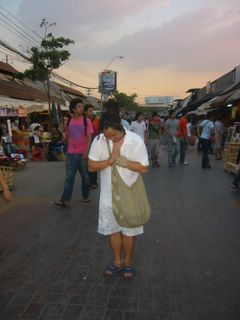 We continued shopping at Chatuchak. We had lunch first to get some energy. Afterwards, we checked out the huge marketplace. I was excited to find a Jamaican shop where I bought a nice bracelet for only 20 Baht. Showed Arlyn my new bracelet. She liked it and requested to go back to that shop. Came back a few minutes later and bought another one. Got mom a bag, Angela a skirt, and myself a nice Rasta flag which now hangs on my wall.

We sampled a sugarcane drink. Refreshing! Got a nice dogtag too.

Then Sharon got lost. We tried looking for her but it's getting late so we proceeded to BTS. Dennis informed us earlier that day that if we got lost, we ought to meet at BTS. We stayed there till 6:15 pm. Still no sign of Sharon (Pasaway).

Had dinner at some bar. Continued searching for Pasaway. I bought a US Army jacket, a Khao Sarn shirt, and some more stuff. Played with my favorite dog for the last time.

Found Sharon at last. Turned out that she indeed waited for us at our meeting place. Unfortunately, she got there late.

Had a drink before beddytime.

Monday, November 29
Last day in Thailand. We had brekky at some restaurant. Left Khao Sarn and went to the airport. *Sighs* Bid goodbye to Thailand. 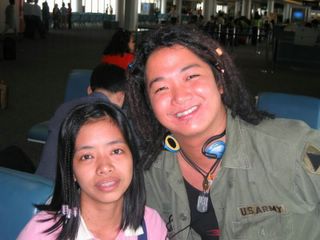 After 3 hours, I'm finally back home. 'twas raining very hard too. Called dad immediately to tell him that I've arrived.

posted by knottydon at 4:19 PM