Bora is Sweeter the Second Time Around Part 1 of 4

With less than 2 hours of rest, I sleepily hurried to the bathroom and took a quick shower. Beng & Shell were supposed to meet me downstairs at 7. While still in the shower, I heard my cellphone rang. I immediately dressed up and heard a knock on my door. 'twas my friends. They stayed for a few minoots and tried to watch tv while I prepared my stuff.

We reached the centennial airport around 8. We're early this time. No sign of our other friends. Before getting my boarding pass, I took a leak. When I got back, I saw Table. We claimed our passes and waited. I couldn't last my mornings without coffee especially at an early hour like this. I normally wake up around noon during weekends. I bought my caffeine load at a Nescafe bar.

Before 9, Table had the feeling that we're waiting at the wrong gate (through people speaking a different dialect). She checked and was right. So we went looking for our correct gate and saw Ogz, Laaa, Mikks (donning a hat a la Leon Guerrero), and Claris. 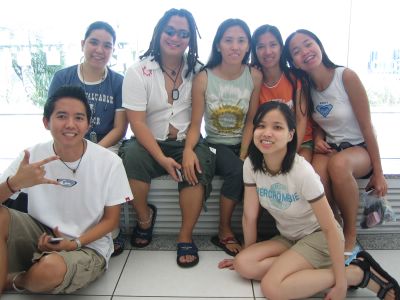 We had our usual picture taking before boarding our plane. Inside the PAL aircraft, some cold air was blowing above our seats. It looked like a cheap effect in some grabe B sci-fi movie. After 45 minoots, we reached Kalibo. It was a very short flight. I wasn't able to take some shuteye =o( Picture taking some more. 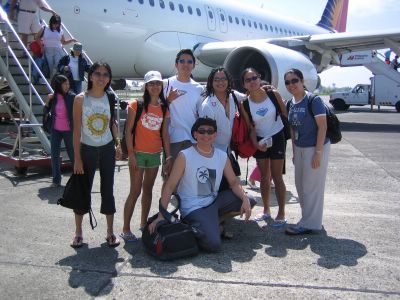 We got on a van that took us to Caticlan. Rhymes, eh? It took us about 2 hours to reach the boat station. It was already noon and my tummy was growling. Wasn't able to eat my food inside the plane. Thought I'd give it to Lance. Instead, my first meal was Cheetos (courtesy of Mikks).

According to Laaa, her parents would arrive in about a quarter of an hour so we waited for them. We enjoyed the performance of some senior locals playing folk songs for Boracay visitors. We also put on some sunblock.

Around 12:30, they appeared. We boarded a small boat and proceeded to Station 3. Angela, with Lance and Fiona, met me there. I was so happy to see them again. I kept on shouting Lance's name while still on the boat. My family all gave me a welcome kiss. I noticed that Fiona had some wounds on the space between her nose and lips. Poor kid.

Excused myself from my friends. Angela and I, along with the kids, got on a tricycle and went to see their humble abode. Angela cooked some Chicken and Pork adobo and that was a fantastic meal after my Cheetos brekky. Ate a lot! Later on, Kuya arrived.

Around 4, I met my friends near Willy's Rock at Station 1. We swam for awhile. I truly missed the clear water and the fine white sand of Bora. Later on, the group of Jowee and Dennis joined us.

Then it was frisbee time. Chel brought her frisbee and we first warmed up by forming a circle and tossing it from one player to the other. It was fun. I prayed that my back won't hurt again. After some minoots, we decided to play. Our game didn't last because it was getting dark.

Then came a black Labrador. Being an animal lover, I immediately called on the dog by whistling. It came over and let me pet him. Even Mikks, Claris, and Dennis went over and tried to pet him too. It was a kind animal. Or so we thought. Noticing the frisbee being tossed around, the dog began his attempt to grab our toy. First he couldn't reach it. He began barking at the handler of the toy. There were a few screams. He eventually captured it. At first we thought he'd give it back without a fight. But we were wrong. I even shouted some commands to no avail. He began destroying Chel's frisbee. We didn't know what to do. We're afraid that he might bite us or sumpthin. Mikks tried to grab the dog and the frisbee in his mouth. When Dennis got it and threw it away towards the waters for the last time, the "devil" dog somehow knew it was him who last handled it. He began barking at Dennis and wouldn't stop. Noticing that there ain't no frisbee anymore, he left us for good. We later found out the name of the dog--Bravo.

Shell excused herself from the group. We felt bad for her. No more frisbee =o(

My friends thought of taking a bath and changing first before dinner. I met Kuya and his family and we had dinner at Shenna's. It was a familiar restaurant. A year ago, my friends and I had a very late dinner here. I got me-self some spicy squids. Angela ordered for bangus. Kuya got some chicken a la king. And Lance had some shrimps.
Bought Lance a toy and mom her pasalubong--a Bora bistida. Lance met Nathan and they played for a few minoots. I even started my secret handshake with Nathan. I left my friends at Mikay's where they will have their dinner. 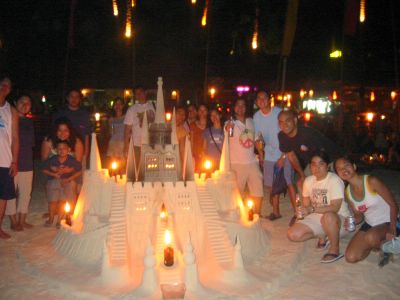 Back home, I took my bath and changed. Met my friends at D'mall. We bought a beer at some store and walked towards Club Paraw. There were a few sandcastles on the beach. I missed the spicy hotdog and bought one. We drank some SanMig Light and teased Shawie a lot. One time, she told us that she doesn't get drunk easily. So Dennis and I vowed to make her drunk here at Bora. 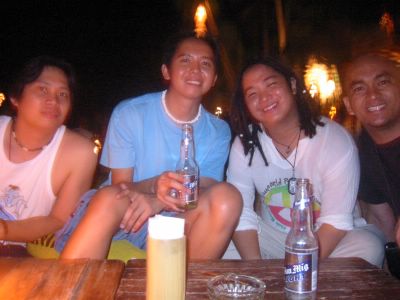 After some isaw and fish cracker, some more SanMig Light, and some more Weng-Wengs and Kamikazes, people started to get tipsy. Table, Shell, and Shawie got drunk. It was a very funny night. Shawie's pitch gets higher, the more she gets drunk. And that made us laugh a lot. There were curses and laughter and tears even!